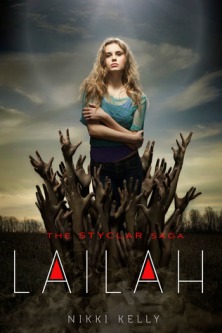 The girl knows she’s different. She doesn’t age. She has no family. She has visions of a past life, but no clear clues as to what she is, or where she comes from. But there is a face in her dreams – a light that breaks through the darkness. She knows his name is Gabriel.

On her way home from work, the girl encounters an injured stranger whose name is Jonah. Soon, she will understand that Jonah belongs to a generation of Vampires that serve even darker forces. Jonah and the few like him, are fighting with help from an unlikely ally – a rogue Angel, named Gabriel.

In the crossfire between good and evil, love and hate, and life and death, the girl learns her name: Lailah. But when the lines between black and white begin to blur, where in the spectrum will she find her place? And with whom?

Gabriel and Jonah both want to protect her. But Lailah will have to fight her own battle to find out who she truly is.

It’s been almost a year since I originally read Lailah and I honestly have no good reason for not reviewing this book before. I read Lailah while I was on holiday in the wilds of the Welsh/English border. There was no phone reception or internet, unless you went into the pub and connected to their wifi. Before going away I had pre-ordered via Amazon and hoped for the best that I would be able to get the book on my Kindle on release day. Fortunately for me (and not so fortunately for those I was on holiday with!) I did download Lailah and spent the next two days with my head firmly stuck in Nikki Kelly’s amazing world.

I had heard a heck of a lot about Lailah even before it was published publicly for all to read. British author Nikki Kelly originally published the story online on Wattpad and it was picked up by an American publisher; the American YA audience loved it and (quite rightly) got behind Nikki and made Lailah and the Styclar Saga a sensation. ARC copies of Lailah were pored over, rejoiced over and the praises sung of the story and author for many weeks before and after the publishing of Lailah. Reading it for myself I can certainly see why. I am certainly a massive fan of this amazingly talented Brit myself!

Lailah is a paranormal sensational story written in the first person; I did this and I went to that… Not a format I would normally read but being front and centre of a YA Paranormal-y Romance-y Action-y story really appealed. The book is filled with vampires, angels, demons and angels… A chaotic mix which works perfectly and yet totally confuzzles the reader in a rather please ‘Give me more’ way!

The writing is open and appealing and extremely easy to read and lose yourself in. The story, although some may at first say mirrors others of the same genre, surprises the reader with twists, turns and mysteries which leave you wanting and eager to turn the page. For me it was definitely an ‘Oh God it’s 4am and I have to be up in 3 hours, why the hell can’t I put this book down and go to sleep’ book. High praise indeed! it’s also a re-readable book. I’ve read it I-don’t-know-how-many times so far but I still love it and keep going back to it. I spot things or make connections that I haven’t before. That’s the kind of book I really love; one which will sit well-worn on my bookcase, not gathering dust because it doesn’t have the chance to sit still long enough.

My love for it is something I’ve certainly tried to share and I hope I’ve been doing my bit here in the UK – I managed to persuade my library to buy a copy and it’s not been too long on the shelves so far to my knowledge!

So, have I persuaded you to give it a try? Let me know if you’re Team Gabriel or Team Jonah! Me? I’m Team Lailah; she’s strong and able and should be a team all of her own!

The second book in the Styclar Saga series ‘Gabriel’ is available for pre-order and will be released on the 27th October 2015; not long to go!

Gabriel is an Angel Descendant. He’s also an ally to a generation of vampires who want to break away from the demon who controls them. His faith in the power of good over evil wavers, however, when he discovers that Lailah, the woman he considers his only true love, may be both angel and demon. Is their love enough to overcome the dark forces who are ready to go to war with Gabriel, the vampire Jonah, and the angel and vampire forces? And can Gabriel compete with Jonah, who is also in love with Lailah?

NIKKI KELLY was born and raised only minutes away from the chocolately scent of Cadbury World in Birmingham, England. Lailah was first launched to wattpad, an online readers and writers community. Within six months, the novel had over one million reads. Lailah is Nikki’s debut novel, and the first book in The Styclar Saga. She lives in London with her husband and their dogs, Alfie (a pug) and Goose (a Chihuahua).

One thought on “Review: Lailah (Styclar Saga #1) by Nikki Kelly”